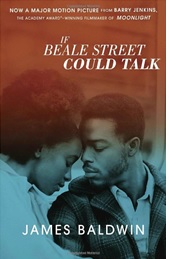 February is Black History Month and to mark the occasion, Humanities Professor Renee Gaines will be facilitating a book discussion on James Baldwin’s If Beale Street Could Talk. The novel, published in 1947, is a love story set in Harlem in the early 1970s and encompasses the themes of racism, social injustice, and relationships. A major motion picture based on the book was recently released.

The discussion will take place on Thursday Feb. 28th at 1:45pm in the Library Multipurpose Room, S217. All are welcome, including those who have not read the book. Refreshments will be served. Copies of the print book and audiobook are available in the library.

The film “If Beale Street Could Talk” is nominated for three Academy Awards, including best supporting actress and best adapted screenplay. Director Barry Jenkins previously drew critical acclaim for his work on the 2017 best picture, “Moonlight.” He sits down with Jeffrey Brown to discuss the process of adapting James Baldwin’s work to the scree.